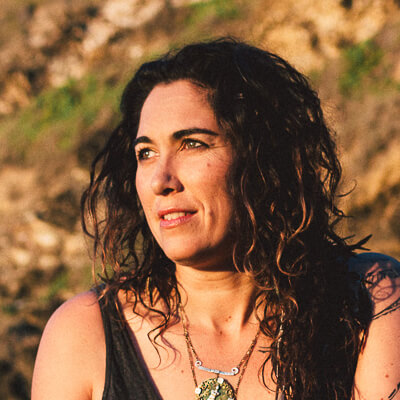 Story is at the forefront for troubadour Áine Tyrrell whose rich songwriting practice draws deeply on her Irish roots. Her latest offering ‘Return to the Sea’ was written and recorded in her homeland but mastered and crowdfunded with one boot in the red dirt of her adopted country of Australia. Fiercely independent Tyrrell is not one to bend to the demands of conventional production arrangements, and so with the help of Creative Arts Victoria, her long time musical producer Mark Stanley, and her international fan base, ‘Return To The Sea’ went rogue, recording in lounge rooms, front bars, old churches, and remote islands.

The full album, due for release January 2019, is a treasure trove of contemporary narratives and musical sojourns with a solid respect for tradition and a passion for adventure and travelling to new lands, both real, and musical.

Tyrrell’s passion proved to be inspiringly infectious with her Pozible Crowdfunding campaign raising over $18k in just three weeks to complete the project on her own terms. ‘I have a true pirate spirit. It’s in my bones. There’s no ship I can’t captain. Or at least try,’ she says ‘but you can’t do it alone. You need a rebel crew!’

‘I am Irish,’ Tyrrell goes on to say, ‘but there is a real sense of place in Australia in my music. It’s not strictly Irish and it’s not Australian. I am so proud of the musical heritage I come from. The sense of tradition musically is grounding, but tradition in its essence has boundaries, expectations, and ingrained rules. Leaving home made me push my music and myself out of that box. It has given me permission to break the rules,’ she says. ‘I have learned to draw from that deep well, but I value the freedom I have to express it in my way and I have Australia to thank for that.’

Her unique musicianship and an equally deft touch with a killer hook or a heartrending lament has attracted the attention of many celebrated musicians in Ireland and Australia including Glen Hansard who mentored her 2017 EP release ‘Fledgling Fall’. Tyrrell’s seductive, mournful voice, atop a stirring Celtic soul romp, is given a little extra finesse by her friend Hansard on her the single ‘Don’t Be Left Crying’. The song climbing to Number One on Ireland’s national broadcaster RTE’s Independent Music Charts on her first ever release in Ireland.

That’s just part of the story that continues to unfold for the Australia-based Irish musician, Tyrrell on her extraordinary journey. The gypsy spirit runs strong in Tyrrell who recorded her first album ‘Queen of Swords’ with creative partner in crime, Stanley aboard her 1966 Bedford Bus through the South Australian desert and into the caves of the mining town of Coober Pedy. She spent 2017 on back to back musical odysseys across Europe, Ireland and Australia packed with guitars, banjos, tin whistles, and three kids aboard her bus. As if touring venues and playing world class festivals internationally wasn’t enough for Tyrrell, she used the time in Ireland to record ‘Return To The Sea’. The album is a musical journey across her homeland collaborating with Mark Stanley and Karl Odlum (The Mary Janes), Liam O’Maonlaí (Hot House Flowers), Joe Doyle and Colm Mac Con Iomaire (The Frames), and Declan O’Rourke.

‘Return To The Sea’ is something of a homecoming both musically and physically as Tyrrell returned to the places and the people that made her including her father, Seán Tyrrell, one of Ireland’s most revered and enduring folk singers.

‘The ethos behind this album was coming back to find a source,” says Tyrrell “My first album ‘Queen of Swords’ was very personal, a cathartic piece of art to be able to pick up the pieces of my life after a destructive relationship. It became a passage to freedom. ‘Return to The Sea’ is about standing in power, owning your own skin and making sense of the shared responsibility we have as humans. The album embraces stories that have inspired me to do more than just sit and hope for change. It is my call to arms. Many observations between Australia and Ireland are scattered through the tracks, but the one common thread is that together we rise in strength when one human experience can mirror and then shape our collective understanding and action.”

Tyrrell’s own story in itself is the stuff of quiet cinematic inspiration, a powerful example of overcoming adversity. Tyrrell recklessly disregards what is considered impossible and rewrites the book every step of the way. Her passion for justice and integrity has led to her supporting current Women’s Rights and Indigenous Rights issues through performances, social media campaigning, song writing and public speaking engagements.

Tyrrell’s passionate music draws from a number of styles and influences. Certainly traditional Irish folk is in her blood, but so too are elements of soul and rock ‘n’ roll. Her upbringing in County Clare and in the United States (her mother is American) and her new-found love of Australia also means she is drawing from many cultures in her writing.

The last two years have been huge for Tyrrell. In addition to her own massive touring schedule, she joined Paul Kelly, Shane Howard, Pauline Scanlon, Declan O’Rourke, John Spillane and her father on the national concert tour Exile, a line-up of outstanding Irish and Australian artists who came together for a celebration of Irish influence in Australia, creating a rich tapestry of stories, imagery and music. 2016/17 saw Tyrrell perform successful headline tours around Australia, Europe and Ireland as well as performing at Woodford Folk Festival, Adelaide Fringe, Mullum Music Festival, Cygnet Folk Festival, many others and Electric Picnic in Ireland. She has earned the reputation of being an unmissable live act.

This year the Queen of Swords stakes her claim and invites you to share the stories of her journey, and her soundtrack to salvation. Her forthcoming musical offering, ‘Return To The Sea’ is a call to arms, a siren’s wisdoms and warnings, and most importantly the soundtrack of a woman who walks her own beat.