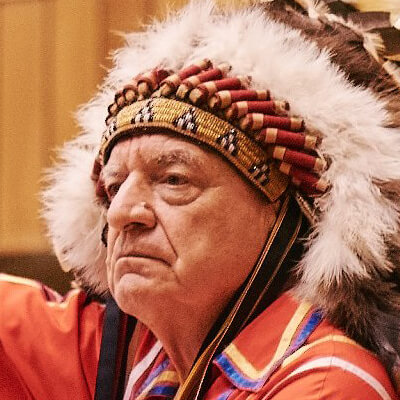 Hereditary Chief Phil Lane Jr. is an enrolled member of the Ihanktonwan Dakota and Chickasaw Nations and is an internationally recognized leader in human, community, and economic development.

During the past 50 years, Chief Lane has worked with Indigenous Peoples from the Americas, Micronesia, South East Asia, China, India, Bhutan, Hawaii, and Africa. He served 16 years as an Associate Professor at the Faculty of Education at the University of Lethbridge, Alberta, Canada (1980-1996).

On August 15, 1992 in recognition of his hereditary lineage of leadership and longtime service to Indigenous Peoples and the Human Family, Indigenous Elders from across North America recognized Phil as a Hereditary Chief of the Hinhan Wicasa and Deloria Tiospayes of the Ihanktonwan Dakota, through a Traditional Headdress Ceremony.

Since 2008, Chief Lane has stepped into global leadership. He currently serves as a member of the American Indian Science and Engineering Society, (AISES), Council of Elders. He is host of the Shift Network’s Global Indigenous Wisdom Summits. As well, Chief Lane is an Honorary International Advisor to the Help Foundation of the Beijing Women’s and Children’s Development Foundation and is a co-founder and Global Trustee of the United Religions Initiative.

In 1982, with Indigenous elders and spiritual leaders from across North, America, Chief Lane founded the Four Worlds International Institute (FWII). FWII became an independent Institute in 1995. With Chief Lane’s guidance and applied experience, FWII has become an internationally recognized leader in human, community, and economic development because of the Institute’s unique focus on the importance of culture and spirituality in all elements of development.